Last year for the craft fair I only made one draught excluder.
Paisley Draught Excluder

This year I have cut 6 liners from a thin IKEA duvet which were each 36" by 18" sewn into a tube with one end left open. I have then been stuffing them with my scraps as I sew and sewing the end up once they are full. I also went through scraps I had saved and used any which were too small as stuffing.

So far I have only made one cover in a dark navy denim type fabric which is printed as though it was embroidered with crewel work.

I love this fabric, but had not used it for anything, so thought it might go down well on the stall.
Shall I do another one the same, do you think? Or is it better to have them all different to give people choice?

I have also made DBF a travel bathrobe but he says he'll model it on holiday so no photos.
I made size XL in plain navy blue polycotton from Simplicity 5763 which I think is OOP, and followed the pattern without deviation! So it looks a lot like the chap on the envelope. 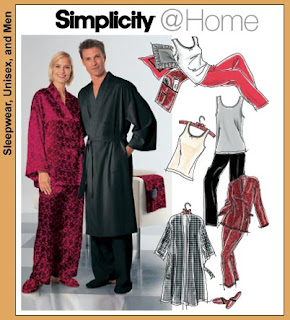 I think that would have wide appeal and someone might want two matching... one each for front and back doors, so probably worth making two. You can always put the things that do not sell onto the next fayre table after all.

I made a second one but felt two was enough, so I think the next two will be plain dark blue. I have also made a floral bag with burgundy handles.