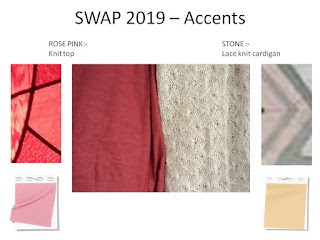 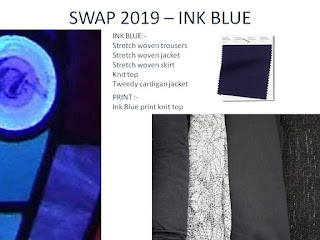 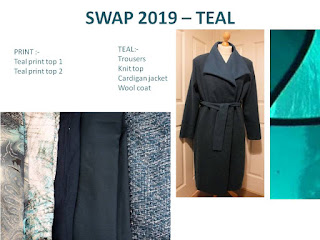 I'll stick with these colour groupings, but may have to sub in alternate fabrics if the yardage is too short or some other issue arises.

I plan to start cutting out the teal pieces soon.
Posted by SewRuthie at 09:28 1 comment:

Here are the fabrics I've chosen for SWAP 2019. 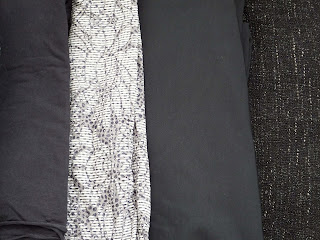 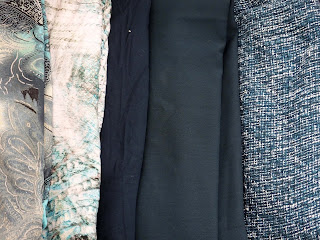 The TEAL fabrics left to right - print poly knit for a dress/top, print viscose for a knit top. dark teal knit for a top, dark teal woven for trousers and teal tweedy fabric for a cardigan jacket.

And finally a ROSE PINK jersey for a knit top and a STONE stretch lace for a cardigan.

The dark TEAL trousers and knit top are the most attractive to me currently as I have teal thread on the machines and sewing in the same colour story works so well for me. Maybe the tweedy jacket after that before switching to INK BLUE?

I've gone for darker teal as I think this will be more flexible as a neutral.
Posted by SewRuthie at 19:40 2 comments:

I decided that I would have Ink Blue and Teal as my Base Neutrals with Stone and Rose Pink as the Accents. 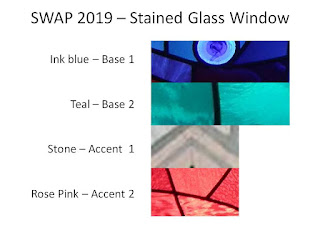 Using this palette I investigated my fabric resources. I then came up with these possible garments (I know its too many but that gives me some wriggle room!). 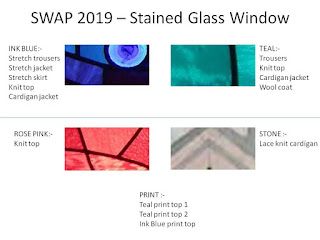 As a minimum I would like to make trousers, top and cardigan jacket in each of my Base neutrals (INK BLUE and TEAL) and then add some accents colours and prints. The reduced set is marked with a (*) and the extras with a (-).

The light is bad at the moment but I hope to do some fabric photos tomorrow
Posted by SewRuthie at 22:22 No comments:

2018 Focus
During 2018 I have concentrated on Stash Shrinker and the Stitchers Guild SWAP 2018. 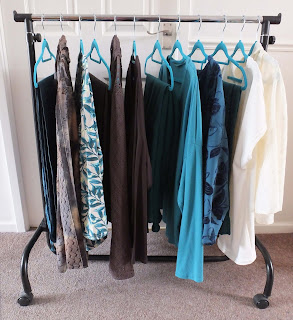 Some Statistics
I managed to sew up 128 metres of fabric and only buy 64 metres (including blankets/throws which I counted as yardage) so have managed the 2:1 ratio.

I also gave away fabric for charity and via a local contact, though I didn't measure it, there were 4 laundry bags of fabric (of the style below) and a large box of patterns. 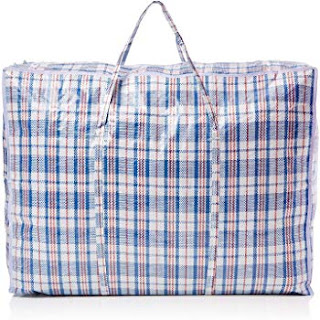 I made one pair of shorts for DBF, and some bags for folding chairs for a friend. I made lace curtains for all the upstairs windows in my home and some cushions for a wicker chair.

Everything else was clothing for me! Clothing wise I made 60 garments (and a scarf).

January was by far the most productive month, with the rate gradually dropping as the year went on, but spurred by the SG SWAP in the earlier months and TSP SWAKOP/ SG Autumn 6PAC in the autumn.

In the summer I wore the teal linen trousers and leaf print top a lot. 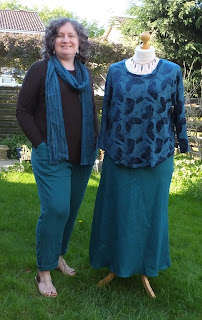 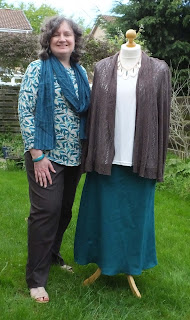 And the scoop neck tops from the Burgundy Autumn Collection have proved very handy and get worn repeatedly. 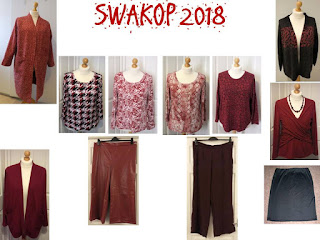 My biggest sewing achievements in 2018 were:-

1.  to place first in SWAP 2018 on Stitchers Guild in May 2018.
(I chose to have pdfs of StyleArc Patterns as my prize so will probably see me experimenting with them a bit more this year).

2.  to sew more than 100 metres of fabric during the year (which happened in late August 2018). The rate dropped off a bit so the annual total was 128 metres sewn.

3.  to finally complete (in December 2018) the teal wool coat I have been planning in earnest since December 2017.

1.  to join in with SWAP 2019 on Stitchers Guild (though some of the rule phrasing has baffled me slightly).

2.  to participate in some of the contests at The Sewing Place, (where they appeal and the time frame works for me.)

3. to continue to sew at least twice as much fabric as I buy with a new Stash Shrinker Spreadsheet for 2019.

4. to continue to declutter my house, with a particular emphasis this year on the loft area.

And that's probably it. I'm not going to join the RTW fast, any of the PR contests or anything which requires an Instagram account. I may do some of the MAGAM challenges as well.

In the past I have sewn lots of small items for a charity stall. I was not able to attend the May Day event this year due to a wedding. Then taking a step back let me evaluate the return on the effort expended. So I've done very little sewing for charity this year, instead giving fabric away for donations and to local good causes and increasing my payroll giving. I'll see how this area goes in the future.

I have been working on this simple coat very slowly over the last few weeks. 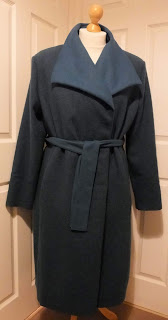 It still needs hemming and a good press but is otherwise complete. I've added a lining in a dark teal satin, and pockets, belt and facing/collar in the slightly lighter teal wool. I think it works quite well. 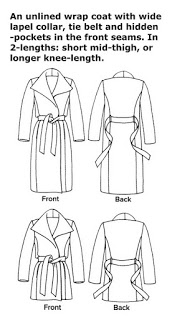 ------------
The pattern was from the UK women's magazine Prima, which includes a free sewing pattern for subscribers. This was the one from Feb 2015. 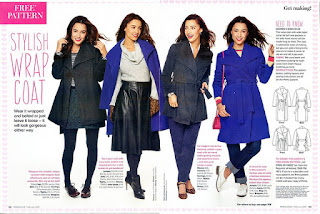 Patterns are available on ebay in the UK. But you can see its quite a simple pattern. I made mine 4 inches longer than the knee length version. 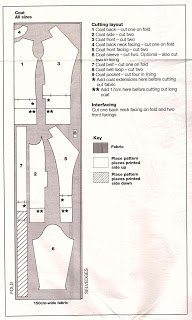 I finished this in mid November but I've not been too well so took until now to do photos. 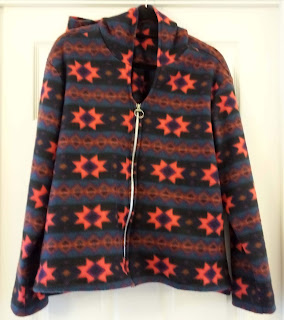 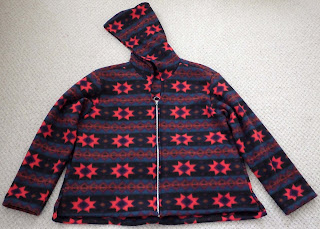 Looking at it now I can see I have not centered the star motif, and the print does not match across the front and back. A lot of that was due to fabric limitations as this was sewn with what was left after I made lots of fleece hats from the fabric last year. 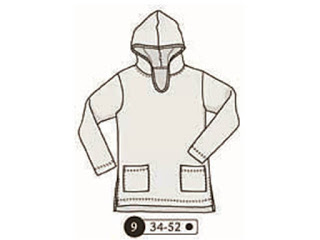 The pattern is based on Ottobre Autumn Winter 5/2014 Hoodie number 9. I made a size 46 flared out a bit at the hip. I also shortened it a little, but kept the side splits and high/low hem. I added in seam pockets made from scraps of a co-ordinating plaid fabric. I also added a centre front zip to break up the pattern a bit as the horizontal stripes were very dominant.
Posted by SewRuthie at 11:17 2 comments: