Voilà and muslin or toile

I see these two mistakes quite a bit on blogs, posts on sewing sites etc, so thought I would set them straight as they make me pull a little face every time I see them. 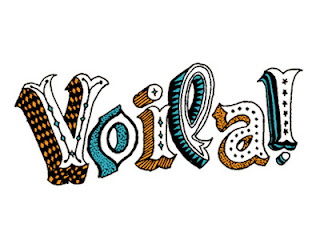 Voilà
The first is the many misspellings of voilà. As variously Vwa-lah, Wa-lah, Wa-la, Wal-lah

This word is from the French From vois (“see!, look!”), second-person singular imperative of voir (“to see, to look”) and là (“there”), literally meaning "look there!".
It is used to call attention to or express satisfaction with something that is presented or something that has been accomplished:

Choose the pattern and fabric, sew up the project, and—voilà!—a lovely new garment to wear.

Completely appropriate for presenting a new sewing project on your blog but it would be lovely to see the french spelling! 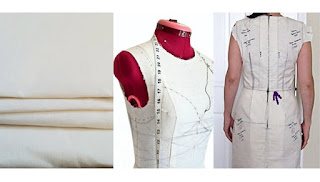 Muslin
When sewing clothing, a dressmaker may test the fit of a garment, using an inexpensive muslin fabric before cutting pieces from expensive fabric, thereby avoiding potential costly mistakes. This garment is often called a "muslin," and the process is called "making a muslin." In this context, "muslin" has become the generic term for a test or fitting garment, regardless of what it is made from.

Please do not use muslim which is an alternative spelling of moslem and means a person who is a follower and believer of Islam.

Back to the fabric used for checking the fit of a new style - but which additionally confusingly means different things in the UK and the US.

In the UK, Australia and New Zealand:
In the US:
Printed calico was imported into the United States from Lancashire in the 1780s, and here a linguistic separation occurred, while Europe maintained the word calico for the fabric, in the States it was used to refer to the printed design.

Toile
In the UK in sewing classes I have heard more the word toile used for a test garment rather than muslin which I've read more online.

In Australian and British terminology, a "toile" is a version of a garment made by a fashion designer or dressmaker to test a pattern. They are usually made in cheap material, as multiple toiles may be made in the process of perfecting a design. Toiles are sometimes referred to as "muslins" in the United States, named for the cheap, unbleached cotton fabric available in different weights.

Toile is a fabric, from the French word meaning "linen cloth" or "canvas". The word "toile" can refer to the fabric itself, a test garment (generally) sewn from the same material, or a type of repeated surface decoration (traditionally) printed on the same fabric. The term entered the English language around the 12th century.

So there you have it, and I promise I will be back to sharing projects I've sewn in my next post!

I will bet 99.5% of the erroneous use of "Muslim" is autocorrect. It gets me almost every time. Still!

Thank you for your effort to bring accuracy and clarity to online information. There are a few word usages that bug me.

Per dictionary.com, regarding the use of the word "simplistic":
"Contrary to what some people believe, simplistic is not a fancy word for simple. Simplistic does not describe things that are easy to understand, deal with, or use. Those sorts of things are simply simple. However, if something is too simple—misleadingly so—then it is correctly called simplistic."