My friend B has been invited to a Murder Mystery party, where each of the guests has a character. Hers appears to be a nun though it later turns out she is not. So she wanted a nun costume with a few wrong bits to give the hint.

She is a much smaller size than I am, so I took a few measurements and chose styles which didn't need a lot of fitting.
For the main dress we used Simplicity 8055, cutting a 10 in the upper body, flaring out to a 12 at the hips. 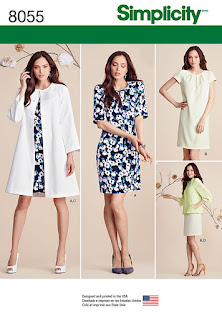 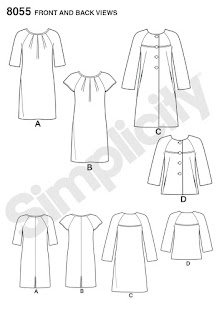 I added self drafted godets in a contrast red fabric at B's request. There is one in each side seam and a third in the centre back.

For the white collar, I made a polo neck poncho from a white knit fabric, using Simplicty8376 as a starting point. 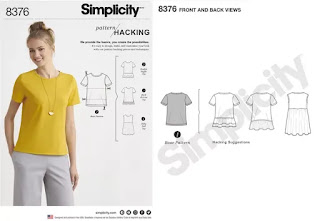 I traced off the upper front and back and extended the shoulder line and added a curve. I also cut the neckband much deeper than the pattern to give a polo neck (turtle neck). I finished the edges with overlocking. 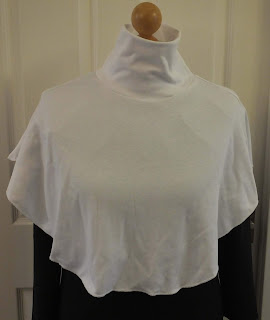 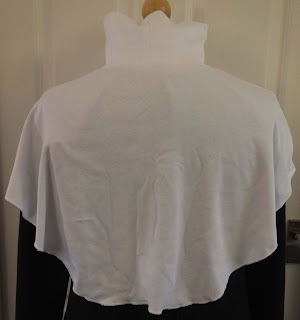 I thrifted two necklaces and combined them to make a neckpiece.

I made a headdress from a square of fabric with one corner cut off and the opposite corner rounded. This was stitched to a headband sized to B's head. 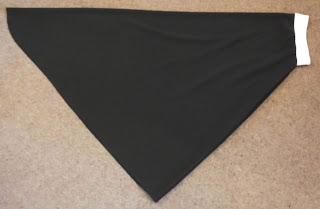 It was a lot of fun making this and I have edited the post to show B wearing the outfit. The party is in a few weeks time.
Posted by SewRuthie at 11:53

Great idea for the costume, and well executed. I hope she can think of a way to wear the dress again in the future.
I've only been to one murder mystery party and my character was an early 20th century aviatrix, a la Amelia Earhart. I was fortunate to be able to borrow flight jacket, goggles and helmet, as I didn't see myself sewing or crafting all that for a one-time event. Fun party though.

What fun, to make a costume for a murder mystery party. You came up with some clever ideas, the turtleneck cape shape, easy headdress, and thrifted necklaces. So effective.