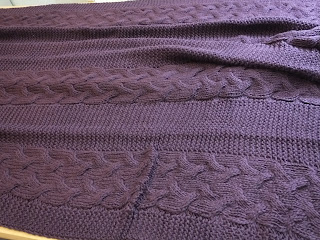 I thought it would make a good cardigan/coatigan, so cut it out making use of the prefinished edges and the cables as much as I could.

The fronts are cut from the side and bottom of the throw using 2 finished edges. The collar is joined onto the front, and has a seam at the back neck.
The back is cut from the other end (so the cables run the other way). One sleeve is cut from each end, so one has the cable running the opposite way.

I don't knit so this is a way to get something which looks knitted by using a throw (or sweater knit yardage).
I've used this approach before but have to say this was the hardest to sew, rather like sewing purple marshmallow worms. It was very thick, the loops got caught on the presser foot and I had to be constantly vigilant to ensure I'd caught all the cut ends in.
I had a much wider seam allowance than usual, sewing first on the sewing machine with a lengthened stitch and then on the overlocker to secure everything.
The overlocker catchment bag is full of purple marshmallow worm casts and bits are in several places around the house. 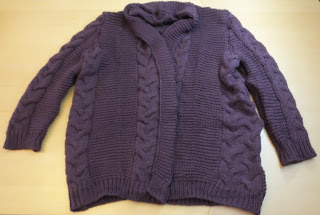 Once I tried it on, I then wore it for the rest of the evening, I love the final result, it is very warm and snuggly. Perhaps not all that surprising given its basically made from a blanket!

Note re pattern - I don't really have a proper pattern for this, but its based on this Prima Pattern from November 2010. You could probably find something similar in Big4/Burda. Basically the front band is attached to the front and also forms the collar. 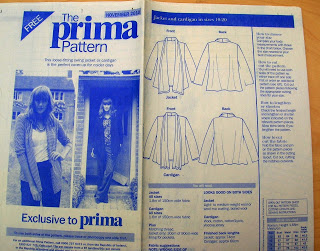 Mine is longer then the pattern here and less of a swing shape.
Posted by SewRuthie at 18:16