The idea of this piece is to bring together the navy and ivory strands in the SWAP. Also I have an orphan navy pinstripe jacket and plan to wear the skirt with it to work. 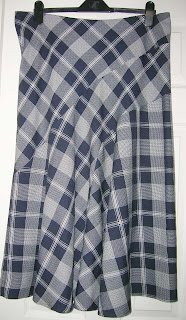 The fabric was originally in my stash, but passed on to a sewing friend when I had a clear out at one stage. Then I was looking for it some time later and mentioned it to her and my kind friend donated it back to me. It is a non scratchy, loosely woven fabric which presses well. I have no idea of the fabric content.I did not attempt to match the plaid as the curved panels basically make this impossible. So I made sure I followed the grainline and used as economical a layout as I could. 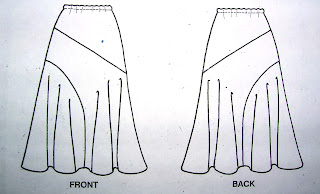 The pattern is an old favourite which had been lost for a 3 or 4 years but I recently found when tidying up.
This is another one from Prima magazine, this time from September 2005, a flared bias cut skirt made from 3 shaped panels. 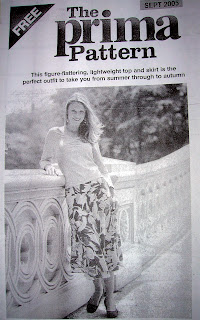 oooh gorgeous... pattern and fabric both. Really love that skirt style for you.