The various freestanding hanging rails I've had in the past either collapsed, broke or were given away. Three collapsed ones (adjustable ones which have dropped to their lowest level) are still in use - 2 in the loft for out of season clothes and one in the airing cupboard for ironing and spare coathangers but the others have moved on. 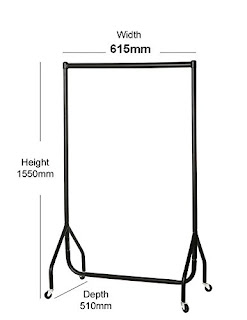 I decided what I really wanted was a super heavy duty wheeled fixed hanging rail, but that was only 2 feet wide so I could wheel it about between rooms upstairs, and ordered this one for about £30 including delivery online.

Having paid £6-£10 for the various ones I had previously I would say this is definitely something where paying a bit more for something much sturdier was definitely worth it.

It is fantastic, it only took a few minutes to assemble (spring clips), wheels about and holds lots of sewing projects with ease. I am really pleased with it.

I can see it being handy when packing for a trip, planning what to wear, doing the ironing and most importantly seeing what works together in a SWAP which is of course what I'm using it for now.
Posted by SewRuthie at 21:43

That hanging rail should be very useful! Now I want one!

Great idea, and a great investment!

Something like this is great for putting things together - for holidays, the SWAP or just to help with wardrobe pruning. And I agree the cheap ones are worse than useless.

Looks very sturdy and useful. Hope it proves to be exactly that.