As you know I have been really into sewing capsules, and whilst I may appear to have paused on that goal at the moment, I am in fact now wired that I sew new things to add to a previous capsule. 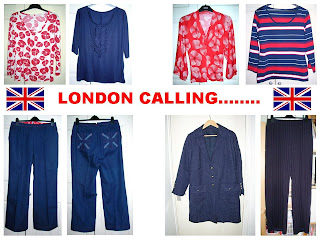 So at the moment I am sewing extras to go with my new jeans (the ones with the flag back pockets.)
These have red top stitching and the coordinating pieces are all in red and navy.
I'm pulling in some navy pinstripe pants from the 'Inspired by the Sea' Collection (which was all navy and turquoise),  a long jacket with 3/4 sleeves from the PR Wardrobe Contest in 2008 (navy and orange) plus a red knit top from the Christmas 2009 collection (black and red).

This all works OK becuase I am fairly consistent with my colours, and because the pieces still combine a neutral with a bright.
I'm making another knit top (dark red) at the moment and then I'll call a halt to this capsule at which point it has

I will have to add red shoes and bag of course, plus a red necklace when wearing the navy top, to avoid being navy woman. These are the pieces I will take with me to London, as I reckon its OK to wear both pairs of trousers twice.
Posted by SewRuthie at 18:55

I love the way you create your capsules. It's great that you can pull pieces from other capsules too. The London collection is inspired! I am slightly obsessed with the Union Jack at the moment and am very tempted to make something featuring one.

I would also say it is fine to wear the trousers twice :-)

It's very inspiring how you able to pull from other capsules to creat a current one. This in esences is how a great wardrobe should work. :)

This is a great, fun, easy going capsule. It says holiday to me. I love it.

Ruthie
Your capsules are fabulous. I'm glad you've decided pursuing these to the fullest. Have you considered going back to those capsules that didn't work as well as you expected and replacing the disappointing pieces?