This year the SWAP (Sewing With A Plan) rules permit cutting out in advance. So I thought I would make my life a little easier and do just that.

I had planned a soft turtleneck style top for several of my knits, and started out with the irregular narrow striped remnant, wondering if the front, back, sleeve and giant collar would fit on the fabric. 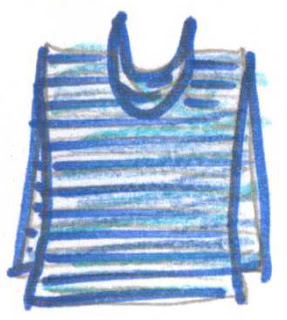 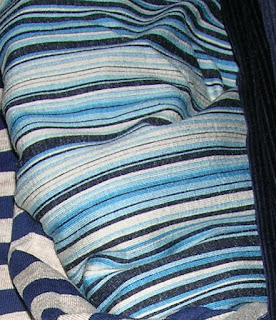 Unfortunately once I laid the fabric out on my cutting board, it was apparent that the stripes run vertically rather then horizontally, and if I have the stripes going around the body there's not enough stretch.
I ignored this once in the past and made myself a Jalie crossover top following the print rather than the stretch and the resulting top is incredibly difficult to get on and off and slightly constricting to wear, so I don't want to make that mistake again.

Another knit with stripes running up and down turned into one of my favourite knit dresses which I wear a lot in the summer, but there's not enough fabric for that as far as I can see. So this peice of fabric gets a time out for now, but may get paired with some navy scraps to become a dress with some contrast components.

I have cut a loose turtleneck out of the red fabric left from my Rhonda Buss 'Lend Me Your Shoulder' top and will probably be adding that into the SWAP as the collar will work better under the jacket.

I also found some navy blue boiled wool in the stash and am wondering if a boiled wool jacket would be more useful than the tweed, so that has been added to the fabric pile.

Fortunately the medium stripe fabric stretches in the expected direction so I should be able to get that cut out without too much excitement.

P.S. This is why I try and keep my SWAP plans relatively flexible as there's always something unexpected which happens!
Posted by SewRuthie at 17:52

I think you're doing well to cut ahead of time and see how your fabric works for you.

Oh, it is frustrating when a fabric does not behave exactly as you wish it to!

The best thing about this (in my opinion)? That you have learned from your experiences and decided against using this fabric on the cross grain. Thanks for the reminder about that.