I loved the altered dark burgundy cardigan so much that I later altered the navy one from the same shop.
Here it was before

And then after the alteration.

I also altered a dark green one I bought in a different place which was a slightly less extreme drape at the front. Here's some in progress shots to show what I did. 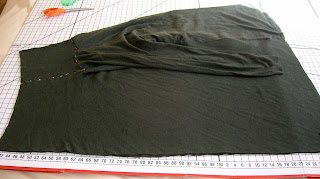 First I laid the cardigan out on the cutting board, folded in half, and pinned the section I was going to cut away. 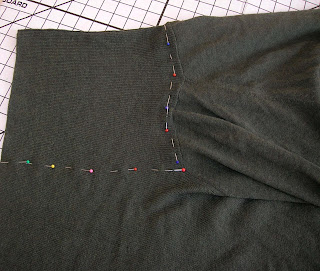 I then removed this section carefully, leaving some of the collar section as a seam allowance for later. 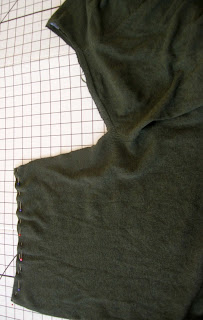 I then sewed the finished edges of the remaining area together, this will form the new cente back neck/centre collar.

I then refolded this to stitch the neck edge back together (the new centre back neck seam is underneath in this shot). 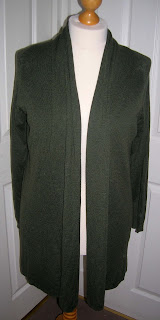 The new cardigan then looks like this! I really love this one. I wore it less last year and the collar was less extreme so the conversion is quite smart.
I only had three of this style and they've all been converted now. I saved the self belts and the pieces I cut from the back necks as they could be useful for something......
Posted by SewRuthie at 22:46

Good job! You have me thinking about refreshing a couple of afghans that I purchased.