Cream Raglan Top plus some hemming

Here's a new version of the raglan tee (based on the Santa Monica tee) which I made in black for SWAP and several prints as tests, I have been wearing them all.
In the SWAP plan I have an cream eyelet blouse and that may yet get sewn, however I decided to sew up this cream coloured tee as I wanted to do some other cream/ivory things and can use it in the SWAP if necessary. Otherwise it will be a great basic in my work wardrobe. 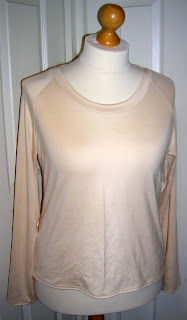 I did originally cut a wider neckband but it looked dreadful so I unpicked it and cut the band down to the usual width and reattached it. I had only sewn the initial stitching on the normal sewing machine, not the overlocker so although it was a little fiddly it was not as bad as unpicking overlocking!

Whilst I had cream on the coverhem I also shortened two overly long RTW items. 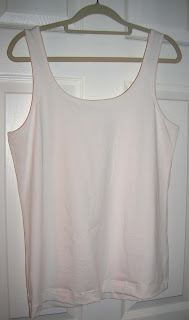 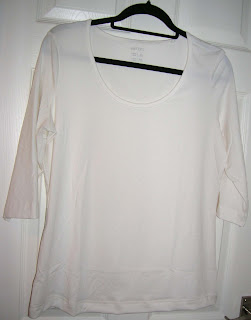 I also turned a dress I sewed in 2010 into a top. The weight of the skirt had caused it to drop and it wasn't flattering to wear, however I thought it would get worn as a top, so hemmed this also on the coverhem machine. 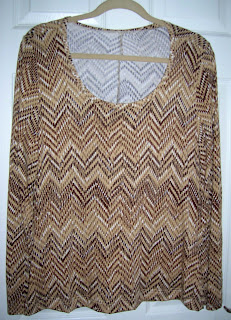 I can see it with brown trousers and a camel jacket for work.

This was the original dress from 2010

I'm going to try and do some mending/alteration type work alongside the other things I want to sew to get these little jobs done too.
Posted by SewRuthie at 20:43

That sounds very productive! I haven't decided about SWAP yet. There's time, though
Happy New Year!

Great job on the cream tops and the print top looks like it will fit with your wardrobe plans magnificently. Finally figured out how to post comments. Love your blog and your productivity~

Thanks Anne, thanks Lynda (glad you've managed to comment).

Both tops look great. Very wearable. You are definitely making the most of the pattern and your sewing time.

Hi Ruthie. Do you know what's going on w the stitchers guild website? I figure if anyone knows it might be you. Hopefully it's a server glitch and they'll be back up soon.
Cheers, Marji

I don't know why I don't have you in my Bloglovin feed, shall rectify. I love this lovely cream top - and good luck with your SWAP plans.