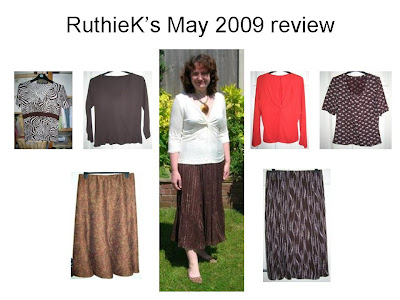 During May I sewed 8 garments, though all simple ones.

2 of the items were refashioned knit tops which were too large. That worked really well, so I plan to keep on with the refashioning going forwards. I have a big bag of clothes I saved from when I was much larger, planning to refashion them somehow, so its been good to do this with some, but also pass some of the items on.

I also made 3 skirts from my modified Loes Hinse Gore skirt pattern. Two of these have worked out really well, and one less so. The ones which worked well are from very drapey fabric, that is quite thin, obviously something that's needed for that pattern. The less successful one was from a fabric which seemed quite drapey but has more body when made up. I am not quite sure what I shall do with it to rescue it.

The other knit tops use a Simplicty pattern for several knit tops (Simplicity 4076) which I used 3 times for two knot front tops (a current favourite) and a scoop neck top with a front gather.
Posted by SewRuthie at 22:31

Email ThisBlogThis!Share to TwitterShare to FacebookShare to Pinterest
Labels: May review

I am still in awe what you achieved in on month only. Wow. Why do you say "though simple styles"? That was what SWAP originally was about! Well done, Ruthie!