I'm quite inspired by Vogue 2989 which I bought at the BMV stand at the Harrogate show. 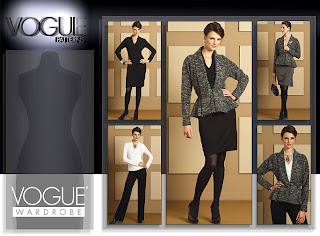 The model even wears jewellery like some pieces I have.
Not sure I'd make the knit pants tbh, and the skirts would need to be a smidge longer, but its quite wearable don't you think?

Project pack up the sewing room has begun and of course has left the remaining stuff unusable for the moment, though I am having a look at the fabrics as I sort and pack them and some are getting left out to be sewn :-)
The jacket LOOKS like its sewn from a sweater knit, though that's not listed on the envelope. Sewing with sweater knits is new to me, so could fit with the new techniques IF I can work out how to sew the fabric.

I think I'll make a bit of time to read the instructions through a few times and see what I think.

Here are the current reviews of V2989 on Pattern Review.
Posted by SewRuthie at 22:57

I've made the dress from this pattern. The front is two layers...not like some cross over dresses, that the "inside" layer ends at the waist. Because of that, it would crawl up during the day, so I cut it off and turned it into a shirt. If I remember correctly, before I cut it off, it was longer on me than it was on the model.

I've made the dress, too, but I ended up lining the front rather than facing it, which made it sit down better. I've been toying with this pattern for SWAP.

Mmm, I am looking forward to seeing what you do with this pattern. I liked it a lot when you first got it.

I have really enjoyed this blog. Keep up the good work. The Septic Tank Man

I also have this pattern, but I haven't used it yet.