Since the part 1 post, I went out and bought 4 spools of dark teal green thread.
I couldn't match the existing spools exactly so went slightly darker which worked out fine.

I watched the video about changing thread and about threading from scratch.
Given the serger wasn't sewing properly anyway I decided to thread from scratch (rather than knot on), so removed the cream thread and started rethreading as per the video.
It was noisy and kept going wrong. I rethreaded the lower looper for a third time and must've done something slightly different because it started working properly. It was fiddly and I used the tweezers from the kit.

Once I was happy it was doing an ordinary 4 thread overlock repeatedly, I was happy to change it to the settings for the rolled hem as per the video on the rolled hem. I used the needle remover tool as shown in the video which was great and avoids dropping the needle inside the machine (which I have done before on the other overlocker) and twiddled the dials to what seemed to match the video.

The test looked great so I then used the rolled hem on my scarf which worked really well. I fray checked the ends and left it to dry whilst I made and ate dinner. I then snipped the threads and took a photo. 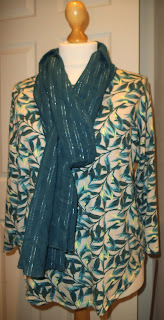 I'm now thinking about all those pretty fabrics which would make great scarves!
Posted by SewRuthie at 21:33

That looks great, and I can well imagine your new scarf coordinating with more than one of the new tops and outfits. I am impressed with your fortitude in tackling the serger even whilst not feeling 100%.