In early June I made this top. 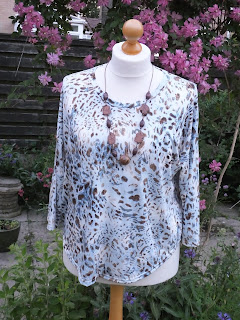 (original top, looks lovely doesn't it, but a problem is lurking)
I wore it once and washed it.
It shrank. A lot. It was now only waist length and completely unwearable. I had clearly not prewashed the fabric, and had NOT (on this occasion) got away with it.
Here it is comapared to the original pattern piece. 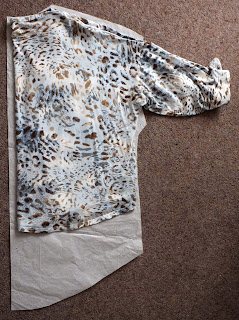 (eek look how much it shrank)
I hung it on a hanger in the sewing room for 'fixing' and put the spare yardage through the wash to shrink that as well. It sat there for a while but was bugging me! 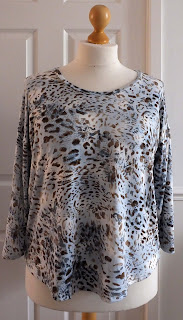 (Front with seam above bust)
The spare yardage was limited so I could not cut the whole top again. So I did the following:-
Cut a new lower front and lower back from the yardage, cut the top off under the arms, curved up at the front and flat at the back and sewed these in place. (I didn't want a seam at the tummy as I didn't want emphasis there, hence why I cut off so high up).
Cut a new pair of sleeves, one from the old lower front and the other front the scraps of remaining fabric. Cut new armholes (so they are less dropped now) and inserted the new sleeves.
Sewed it all back up. 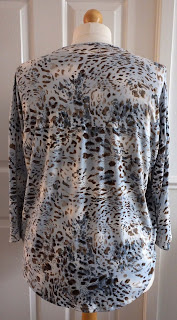 (Back with yoke effect and lengthened back panel, slightly gathered)

I have some small scraps left but nothing large enough for a garment piece. I have some other fabrics prewashing now so this doesn't happen again!!!

Hopefully my reworked top looks deliberate rather than I just added stuff on when it shrank. It was as much work as making the top in the first place, but at least I got to salvage the lovely fabric.

I bought the fabric for this top last year from the Monday Market Man. He has a stall of lovely fabrics at very reasonable prices on the open air market on a Monday.
I'm not sure if he's still there as I've not been able to get out to see him for a long time. I'm also trying to sew from stash as much as I can.
He mostly doesn't label his fabrics but from feel this one had plenty of something soft and natural - cotton/viscose. It did have a very elasticated selvedge which made cutting out a challenge so maybe this should've been a clue? Anyway I am prewashing as much as possible now!
Posted by SewRuthie at 08:20

Nice job! You made me LOL with the comparison photo, but the fixed top looks really great.

Ruthie, that is a great save of your top! No one who sees it will think anything other than how lovely it is...

Oh wow, I can see why you wanted to save it, the fabric Is gorgeous. Where is it from?

Wonderful save!!! I agree with the other commenters, no one will know! Wow that fabric really did shrink didn't it! I've had a few close calls and learned my lesson too! :o)