Whilst I enjoyed sewing for the charity craft stall it has been a fantastic release to allow myself to sew clothing for me again.

I batted several ideas about but still had navy on the machines from the last lot of bags, so carried on with more navy pieces. 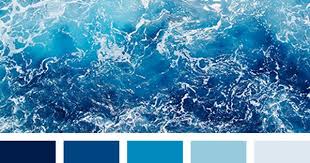 These five pieces came about really easily, as is sometimes the case, but the sixth is a little more elusive though I think it will either be a tuquoise blue or navy tee of some sort

However I also found some other pieces which co-ordinate with the cardigan though not really with the dark navy of the ponte, so there may will be a spin off set. Hopefully I can do the full six before getting distracted with something else.

My collection is not very summery really, however there is time after it , but still within Elizabeth's 3 month time frame to do some more summery things, based around the olive green tropical wool jacket which is STILL not finished.

Pictures of finished garments to follow soon!
Posted by SewRuthie at 18:49

Love all those colors...reminds me of deep blue ocean waters, which does make me think of summer days. Perhaps think about a print with some sand or shell tones.

These are my colours! I love your plan.

Wow. I love those blues!

I absolutely love these colours, and I think they can be very summery, but are you sure they are the right ones for you? I thought (because I'm too lazy to search back) that you were moving to warmer, softer, low contrast colours? Nonetheless, the colours you have chosen here are lovely and summery.