Here's the second item in the Summer Sea collection 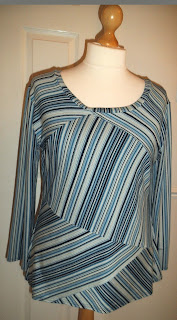 When cutting out I was concerned about how striped it was and wanted to break the stripes up a bit so I did a cutabout arrangement for the front. I cut the back on the fold and then gathered the back neckline onto the neckband.

The top overall is too big, and the lack of a centre back seam means terrible pooling at the back waist as I've not accommodated my sway back.

This fabric has a navy back ground which is then printed in white, sky blue and the turquoisey cadet blue. The cadet blue/turquoise is not very evident so it reads as too cool in colouration and too high contrast for me. 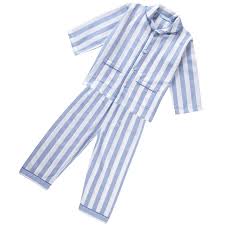 And I've also realised that the print reminds me of traditional blue striped pyjamas, which isn't good for a daytime top. 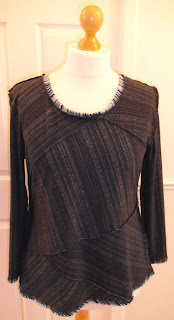 Here's a shot of the inside showing the dark navy base fabric with a little of the lighter colours bleeding through from the print the other side. Its much nicer, I think, than the right side.

This gives me an idea, to cut the top apart at the seams and remake it inside out. I could add a centre back seam to fix the sway back and foreward head issues. I could topstitch down the feature stitching on the cutabout front and rehem it all.
It would need a new neckband though, either super skinny from the old band, or plain navy from another fabric.

Sadly the whole collection continues in this same sort of theme, so brace yourselves for a surprisingly choppy passage on the Summer Sea!

I love the colours and multidirectional bar codes on this! I think you are right though, it's not doing much for you, and your plan sounds good, I'm looking forward to seeing it! Did you have a plan when doing the front of this top? I thought it was important to preserve the grainline when using pieces like this, but that doesn't work with the stripes! I have a lot of bits and pieces to use up, so I'm interested in what you did. I have "The Arful Teeshirt" class on craftsy, I just need the extra push to start...