London Calling: my next collection

Sometimes you just get an idea and then go and run with it.
My latest idea popped into my head, pretty much fully formed and named.
Its LONDON CALLING and is based around some (partly constructed) jeans which have stylised Union Jack pockets. 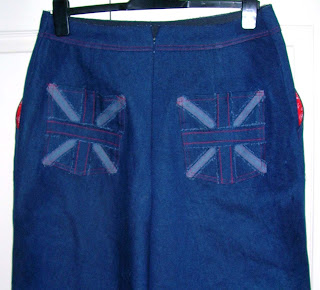 The idea of of these is that they are part of a capsule to wear to the Stitchers Guild weekend in London at the end of July. And having thought 'I'd like some new jeans' the concept gathered steam once I thought of the pockets based on the British flag.
The concept of the pockets took a couple of versions before they were urban rather than crafty and were frankly a pain to sew on, but the effect is pretty much what I imagined so I am pleased.

I am imagining lots of red and navy tops worn with the jeans which have red pocket linings and inner waistband. 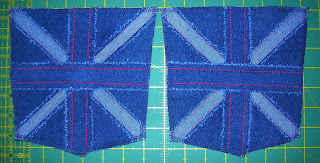 Topstitching is a pain isn't it, I keep having the wrong colour thread on the machine for the next step.

P.S. To Melissa re the overlocker, you CAN disenage the knife, as the chap at Jaycott's did to show me something when demo'ing. You have to move the needles up to the highest position and twiddle a knob.
If I can find the section in the book I'll share.
Posted by SewRuthie at 22:38

What a cool idea for your jeans. They are certainly going to look trendy when you are in London.

Hope you enjoy your trip to London with the other ladies. Am green with envy.

Oh so interesting details! Yes I find that when I'm in a hurry I can sew jeans in half the time if I minimize the topstitching.

Oh they came out fabulous. I adore all the pockets. The peek of red is really pretty and the back pockets are really clever. I wish I had your vision.

oh oh oh! If you can tell me how to disengage the knife that'd be fantastic! I've looked through the manual loads of times but I must be looking for the wrong terms or something...

And if you can tolerate a non-SG gatecrasher, I might be up for meeting up when you're in London, too. I'm right by Tower Bridge so it's pretty easy for me to get anywhere. (and I've got the outline of the Thames on the back pockets of one pair of jeans!)