I love wearing and sewing knit tops. But it must be said that I have really used the same few over and over again now and its getting a bit boring. So I thought I would branch out and try some new knit top patterns. There is always a bit of risk in new patterns (which is why I love TNTs so much) so I bought 5m of horrible pink striped poly knit @50p per metre to use as 'muslin' for knit top patterns.
I know all knits are not created equal but since I have started to pay a bit more for my nice print knits I'd like to know the patterns would work. Particularly in terms of how the front neck and bustline fit as I have sometimes come unstuck on this.
So the two I want to try next are a Kwik Sew knot front top, where the front is all one piece with a centre front seam, this is very simple but I have not had success on the fit with Kwik Sew woven tops so am being cautious.
The second is from Prima magazine so not available anymore but this is an all in one shrug + cami style top which I have seen a lot in shops here but not in a pattern elsewhere. The ones in the shops were either too low at the front or the shrug part exposed bra straps but I am sure if I sew my own I can sort those issues out.

Here's the test shrug top. DH not wowed, but perhaps he can't see past the yucky fabric. Thoughts?
I have made short sleeves in the test garment but would have 3/4 or long ones in reality.
One thought is to gather the centre front with elastic to give a more sweetheart neckline. 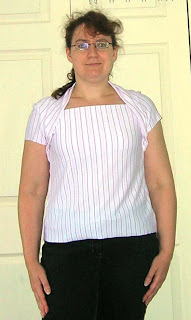 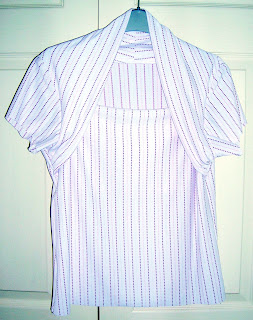 And here is the Kwik Sew knot front top with little sleeves added. I sewed a medium but need a bit more room around the lower tummy and hip area. Not good in a stripe IMHO, but again I am just testing the pattern to see if it works out. A bit of fiddling with the knot is required to stop the wrong side showing but it comes out OK after that. 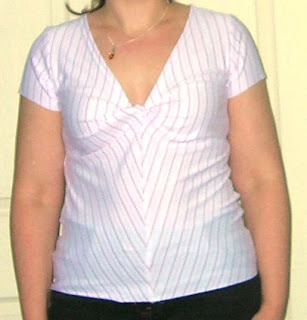 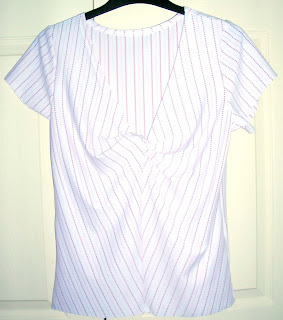 I like the Kwik Sew enough to make it up in nice fabric. Not sure about the Prima though, its obviously not wide enough through the shoulders (I cut a 14)
Posted by SewRuthie at 11:52

The kwik sew knot front is looking good but as you mention, does need a smidge more room across the front.
The Prima has potential. My gut feeling is that the straight part of the neckline is too high on you by at least an inch, possibly more. I would definitely try the elastic to make a sweetheart neckline. I have a Jalie pattern that is very like this, it has a strip of elastic sewn in the CF of the straight section, the elastic is shorter than the area it is sewn to, and is sewn going down vertically so it makes a ruched effect that has horizontal gathers whilst also pulling the straight section down into a sweetheart shape. I think it could be a flattering look on you if you persevere with the neckline though. It does look a tad tight over your shoulders too. Maybe trace out to a larger size just at the shrug part of the top? Perhaps keep the same size front section so you don't get gappage in the cleavage area?

I agree with Jenni that the neckline is too high on the first top, but the second looks very nice!!

I agree with Jenni on the Prima top. I think you need some room across the shoulders. It looks like it's creeping up the back of your neck, too. Although, I like the neckline in front OK.

And DH's can NEVER get past the fabric and see the pattern lines. Mine can't even understand that I make something in a different COLOR than what the envelope shows.

Obviously the Kiwk Sew worked out (based on your new top). I like the Prima, too. In addition to the sweetheart neckline modification, maybe you could just try scooping it a bit so it's not so very straight across. I think it's a nice different look. Maybe it will just take DH a few wearings to get used to it. I know some of the things I've made that my husband scratched his head at at first, he ended up liking since they're something a little different.