Here's my swatch for the wardrobe colours. This is the 'Sophisticated' palette from Imogen Lamport's Absolute Colour system which has a range of 18 palettes.
"Your ideal colours are soft and cool with a depth of colour like summers evening. Charcoal is your black. Your ideal jewellery is a combination of brushed silver and brushed gold."

It is neither really deep nor really light
It is more cool than warm but not extremely so.
It is definitely a Soft (Muted) palette.

I love it and although its been some adjusting, I'm having a lot of fun with it. 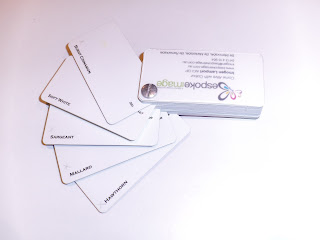 Imogen names all her colours but they don't match with pantone or anything else.

The dark cool brown is called Burnt Cinnamon
The ivory is called Soft White.
The navy blue is called Sargeant.
The teal is called Mallard.
The soft red is called Hawthorn.

These are the colours I am trying to work with for my general wardrobe and also (without the navy) for SWAP.

I've also been trying to do my own version of this post by Imogen Lamport about Dressing to Your Contrast.
https://insideoutstyleblog.com/2014/11/real-life-examples-of-dressing-to-your-contrast.html 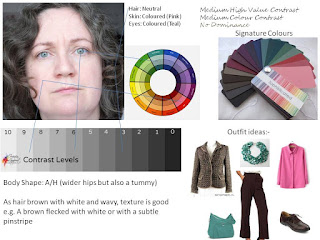 I'd like to try a version for an outfit as a guest to a May UK wedding as well in the same sorts of colours.

I read Imogene's blog also (love it!) but fail to grasp her lessons on contrast. She's done a wonderful job for you. Love all those colors on you!