I used the same pattern again (Burda Style magazine 04/2009 #134) with the same alterations this time with a strange very stretchy metallic stripe fabric from deep in the fabric collection.

I also chose to use the side of the fabric which was mostly dark brown with a bit of copper as the right side and used the much shiner side as the wrong side (I suspect this is the opposite of the original manufacture as some copper chenille stripes are now on the inside also), however I felt this would be more wearable than the full metallic version.

I did some tests on scraps and the coverhem gave the best finish for the hem (stretching with the stretchy fabric whilst not distorting it at all). 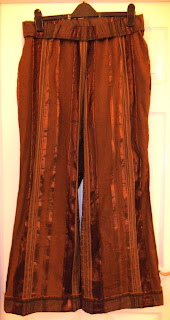 As before the stripe ran across the fabric and the stretch down, so I've cut here on the cross grain.
There is some fabric left but so far I've not decided what it will be, though it is currently leaning towards a jacket of some sort. It very much did not want to be a skirt so I didn't push it. 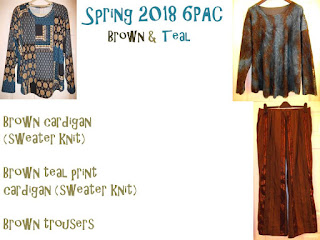 These do work with the tops I already sewed for Spring 6PAC which is a relief as I thought I was sewing a load of mismatched items and was being a bit daft.

I had hoped to make this pattern a few more times in plain dark brown stretch woven but it needs 2.5 metres of fabric and the lengths I tried were 2.2 and 2.0 and were never going to work with this pattern, so they may appear as a different style.
Posted by SewRuthie at 20:47

Interesting fabric. I love the pants you made using it. And they do look wonderful with the tops you have sewn for your 6 Pac.