I've been thinking about how I'm going to approach the SWAP this year since I've not yet started sewing.

Contrary to previous years, I think this year I am going to start with the jacket. And that jacket is going to be lined, collarless, princess seamed from an old Burda envelope pattern which needs only minor tweaks. The tweaks will be to shorten it to the hip bone (its a longer jacket) and do my forward head alteration.
I'm also going to cut out a skirt at the same time. Again using a pattern I already have, this time Simplicity. This is going to be initially quite a long skirt, but I'll shorten it to whatever length looks right in proportion with the jacket. The skirt will also be lined.
(as prep I shall find the patterns, thread, lining, zipper etc and bag up with the fabric ready for cutting later). This suit will be made from the navy/white tweed in the bottom of the picture below. 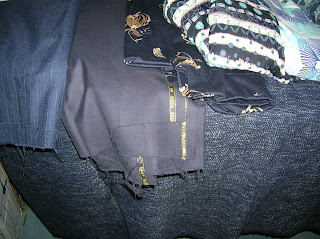 I'll also made a couple of loose cowled collared tops (my version of a turtleneck) from the knit fabrics and have some instant outfits. I can also wear some of these with my existing navy trousers and a brightly coloured boiled wool jacket (red, green, purple).

Next I'll make some side zip tailored trousers from the pinstripe navy wool (far left of above picture). Using an existing Burda WOF pattern which fits quite well. This will give an alternate smart bottom to the matching suit skirt. I may then also make the tie necked blouse from the silky fabric. (The white, navy, turquoise print fabric 3rd from top right). This fabric has been in the stash a long time, but would make a really nice blouse with a bit of pattern matching. 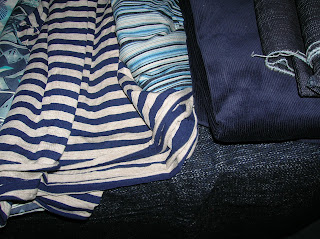 The casual group has two more knit tops, a casual shirt (style tba), corduroy trousers and jeans. These are not currently hugely clear, other than the knit tops will be more cowl necks as I need that style in my wardrobe. Depending on how some of the tops pan out I may re-introduce the planned brown leather skirt and remove the cords.

I've only got three of the cowl neck tops at the moment and they are great in the winter under wool jackets and sweaters which would otherwise chafe, so a bunch more would bring those sweaters/jackets into play more. So I shall probably make a few, including some which won't be part of SWAP. They are quick to make, though somewhat dependant on thread colour!!! and as we all know I am somewhat resistant to chnaging thread, and laike to sew several things before changing :D
Posted by SewRuthie at 07:26

The plan seems to be coming together really nicely. I think starting with the jacket will work well as it gets the most difficult part done nice and early. All the fabrics work nicely together and the patterns you are planning sound both sensible and chic.

Thank you for blogging about your thought process in preparing for the SWAP. I haven't participated in one (yet), and I hope you don't mind that I am planning to learn from your experience so that maybe next year, I can participate in a SWAP or a seasonal 6-pack.

Sandra you are welcome. I've done many SWAPs now and am still learning. It is really a big deal to use patterns you already know work and just adapt them a bit for as much of the wardrobe as you can.