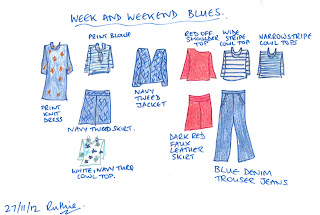 Here's the latest plan for the 'Week and Weekend Blues' SWAP.

As you can see I have introduced a bit of red on the weekend side, plus on the week side I have added a knit dress instead of a top (the fabric just wanted to be a dress). I've recently taken some lovely leather knee boots in to the cobblers to be fitted through the calf and got all inspired to do a few more skirts.

So let me walk you through it.
The week.
This is work approprioate garb. The tweed jacket is collarless, and a dark navy blue with little flecks of white. I already have several pairs of work trousers which work with it, so decided not to sew any more at the moment. The leftover tweed will become a skirt, giving me a suit, this can then be worn with either the silky print tie neck blouse or the white/turq/navy print cowl neck tee. In addition the cowl neck print dress gives another smart look with the suit jacket, but can also be worn alone or with a neutral jacket

The weekend.
This is where I have added the pops of red. The red knit top already exists as it is my Rhonda Buss 'Lend me your shoulder' top. This would be great for going out with either the dark red leather pencil skirt or the dark denim trouser jeans. Then I have two stripe knit tops. The first has wide stripes in navy and oatmeal and is for really casual days at home. The second has irregular narrow stripes in dark navy, white and light blue, this is a drapier knit so slightly dressier and appropraite for dress down fridays worn with the trouser jeans and the jacket.

I can actually imagine wearing every single piece for various things in my actual current lifestyle, so am sold on it for practicality. The red knit top will be my previously sewn item, the dark red faux leather skirt should get sewn up between now and Christmas (so is the sewn since the rules got announced garment) as the red pieces can get some use over the holidays for the various dinners and visits to family.

I'll then start on the jacket and skirt and the knit pieces which can be sewn up in navy thread and then the print blouse. Finally I will switch to white thread at the end to sew the last print knit top.

It has a bit of red, a bit of print, some fun stripes and I really like it. Let's hope it sews up as planned, as I've not followed my own advice and built in any spares!  I guess I will play it by ear and add extra pieces later if required.
Posted by SewRuthie at 21:30

Your SWAP plan looks great! It is fun to hear your thought processes and plans for wearing the pieces!

Love your colour combo, and making it work for both weekdays, and weekends is a brilliant idea. These pieces will be easy to add accessories to...

I think your plan will come out really well. Can't wait to see it all!